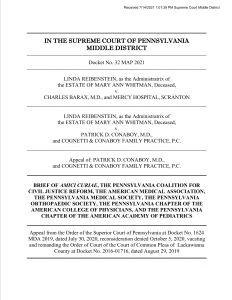 1.Whether the Supreme Court should rule that “cause of death”, as it appears in MCARE’s statute of limitations (40 P.S. § 1303.513(d) (“Statute of Repose”)), refers to medical cause of death, and not “conduct leading to death” (or legal cause of death) as held by the Superior Court.

2. Whether the statute of limitations in a wrongful death or survival act claim may only be tolled under section 513(d) of MCARE (40 P.S. § 1303.513(d) (“Statute of Repose”)), where a plaintiff proves that the defendant against whom the claims are asserted (and not a third party) affirmatively misrepresented or fraudulently concealed decedent’s cause of death? 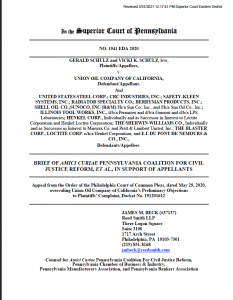 The brief requests a reargument before an en banc panel of the Superior Court to overturn a decision of a Superior Court panel. The Court’s opinion in Spencer v Johnson concluded that the Fair Share Act’s provision apportioning damages based on the percentage of a defendant’s fault does not apply unless the plaintiff in the case is contributorily negligent. The court wrongly concluded that the Fair Share Act does not apply if the plaintiff has zero negligence.

Status: PCCJR’s application for leave to file an amicus brief requesting an en banc rehearing by the Superior Court was denied

Is it constitutional to interpret Pennsylvania’s Long Arm Statute as conferring automatic personal jurisdiction solely because an out of state corporation has registered to do business in Pennsylvania? 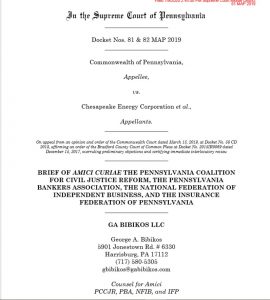 Majority Decision in Commonwealth of Pennsylvania vs. Chesapeake Energy Corporation

Minority Dissent in Commonwealth of Pennsylvania vs. Chesapeake Energy Corporation 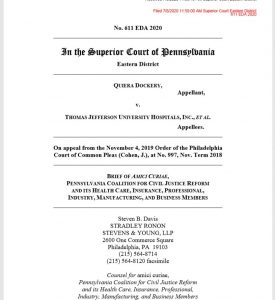 At issue is the constitutionality of Pennsylvania’s Medical Liability Venue Statute and Medical Liability Venue Rule. The decision of the Superior Court, while not directly on the merits, leaves the medical liability venue rule and statute standing. The Superior Court’s decision is a victory against allowing venue shopping to return to medical liability cases. 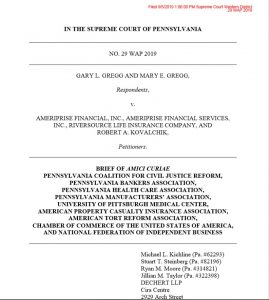 Whether the Superior Court improperly held that a strict liability standard applies to a claim under the “catch-all” provision of the Pennsylvania Unfair Trade Practices and Consumer Protection Law, 73 P.S. §§ 201-1, et seq., as amended in 1996, even though the provision expressly requires proof of “fraudulent or deceptive conduct.” 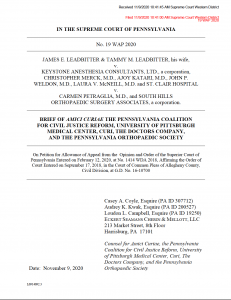 Status: Opinion issued August 17, 2021 favorable to health care and the protection of peer review documents from discovery in litigation. It was an unanimous decision authored by Justice Saylor. Justice Wecht wrote concurring statement.. 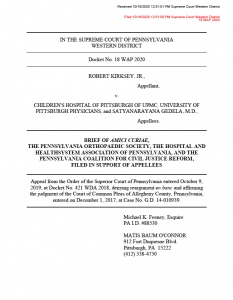 At issue: Must a limiting jury instruction be given when evidence of general risks and complications are admitted in a medical negligence case? 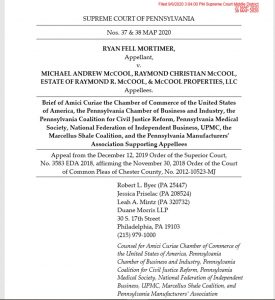 Whether, in this matter of first impression, the Supreme Court should adopt the "enterprise theory" or "single entity" theory of piercing the corporate veil when two or more sister companies operate as a single corporate combine?

Status: Opinion Issued July 21, 2021. The Court declined to adopt a form of enterprise liability for piercing the corporate veil, saying the facts of this case would not allow it. The court did however invite lower courts to take up the enterprise liability doctrine when appropriate under the facts.