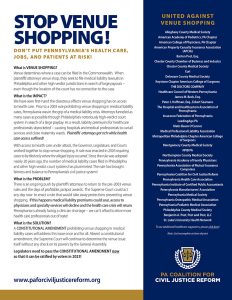 Every 10 years, following the release of the U.S. Census data, the Commonwealth is required to redraw its congressional and state legislative districts. As a result of stagnant population growth, the Commonwealth will lose one Congressional seat – going from the current 18 to 17. The reapportionment process can often be a contentious one and this year is no exception.

Earlier this week, the Pennsylvania House of Representatives voted to approve a new map outlining the state’s new Congressional districts. The map passed along mostly party lines, with all but two Republicans voting in favor and all Democrats voting against. The map was based on a proposal submitted by Lehigh County Commissioner Amanda Holt, which State Government Committee Chairman Seth Grove, R-York, praised as being based on non-partisan data and including many of the priorities called for by the general public. Changes were made to the map by the State Government Committee to make some districts more compact, minimize county splits and to also account for additional public feedback. Democrats have decried the map – stating that they have been left out of the process. However, Republicans have pointed out that no amendments were offered by Democrats to change the map. The map now goes to the Senate for consideration. With a lawsuit challenging the map already before the Commonwealth Court, the Court has given the General Assembly until January 30 to approve a map and send it to Gov. Tom Wolf for either his signature or veto. If a map is not agreed on by that date, the Court said it will take over the process and select a map.

There has also been movement on the maps detailing the state legislative districts. In December, the Pennsylvania Legislative Reapportionment Commission (LRC) voted on preliminary House and Senate maps, setting the stage for the next phase of the reapportionment process. (The Commission is comprised of the four caucus leaders and a member of the public – in this case former University of Pittsburgh Chancellor Mark Nordenberg, who is also serving as the LRC chairman.) The Senate map passed by a vote of 5 to 0. However, major disagreements over the proposed House map led House Majority Leader Kerry Benninghoff, R-Centre and Senate Majority Leader Kim Ward, R-Westmoreland, to vote against the maps. Following the LRC vote, the process then entered a 30-day public comment period in which individuals can file exceptions to the proposed maps. As part of this stage of the proceedings, the commission scheduled a series of public hearings during the first two weeks in January to garner public feedback on the plans. More information on the hearings can be found here.