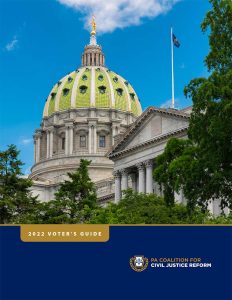 For too long, PA's elected officials have enacted laws and pursued policies that have had a detrimental effect on the Commonwealth's civil justice climate. It's time we change this.

Ten years ago this week, the Fair Share Act was signed into law. Then-state Rep. Curt Schroder, now PCCJR Executive Director, was pleased to join Governor Tom Corbett and a host of Senators and House members to announce this historic achievement.

The Fair Share Act replaced the unfair and outdated concept of joint and several liability where where a defendant could be required to pay 100 percent of a verdict even if only minimally liable. Under the Fair Share Act, each defendant pays a portion of the verdict according to the percentage of liability assigned by the jury and nothing more, unless one defendant is sixty percent or more at fault.

Recently the Superior Court misconstrued the Fair Share Act in the Spencer v. Johnson opinion issued March 18, 2021 (No. 2011 EDA 2019). In Spencer, a panel of the Superior Court in an exercise of torturous legal gymnastics, somehow reached the conclusion that the Fair Share Act only applies in cases where there is a finding of comparative negligence on the part of the plaintiff. In other words, the Fair Share Act does not apply to plaintiffs without negligence. While this portion of the case was clearly dicta, it was presented as alternative reasoning for the court’s decision.

The interpretation of the Fair Share Act as stated in Spencer v. Johnson is flat out wrong! Unfortunately the Superior Court denied a petition for re-argument and the case was settled before it could be appealed to the Supreme Court. PCCJR will be watching closely for opportunities to correct this decision, including a possible legislative clarification.

You can unsubscribe at any time.
Secured By miniOrange