That’s right. Every Democrat and more than a handful of Republicans in the Pennsylvania House of Representatives voted against a bill that would have helped curb opioid abuse by injured workers.

SB 936 establishes an evidence-based prescription drug formulary for the workers compensation system. This bill is designed to bring consistent and high-quality health care to injured workers by ensuring they get the appropriate medications for their needs. Similar formularies have been implemented in states such as Texas, Ohio, and California and have helped to reduce the number of injured workers who become addicted to opioid medicine. This reduces costs in the system and saves lives of injured workers. Most private and some public insurance plans use formularies to guide what medications are prescribed. Such a formulary is necessary when one considers that Pennsylvania has the second highest number of opioid pills per prescription and the third highest number of opioid prescriptions per injured worker in the nation!

SB 936 also addresses issues uncovered by the Philadelphia Inquirer when they reported that the Pond, Lehocky, Stern and Giordano workers compensation law firm owned a pharmacy and was charging the workers compensation system thousands of dollars for unproven compounded medications.

SB 936 passed the Senate by a comfortable margin of 34 to 16. But thanks to an aggressive lobbying effort spearheaded by labor and the trial bar, the vote in the House was 98-98, short of the constitutional majority needed for passage.

The good news is that those who would perpetuate the opioid crisis for their pecuniary gain are losing ground in the House. When a companion bill, HB 18, was brought before the House earlier in the session, it never came to a final vote. The House voted to recommit the bill to the House Human Services Committee. That motion passed by a vote of 102-94.

Thanks to a timely filed Motion to Reconsider, SB 936 can still be brought before the House when the votes for passage materialize. PCCJR and its coalition partners are working to secure the votes needed for passage. Workers in Pennsylvania deserve appropriate medicines that won’t put them in danger, and our employers deserve a more cost-effective system to compensate workers. 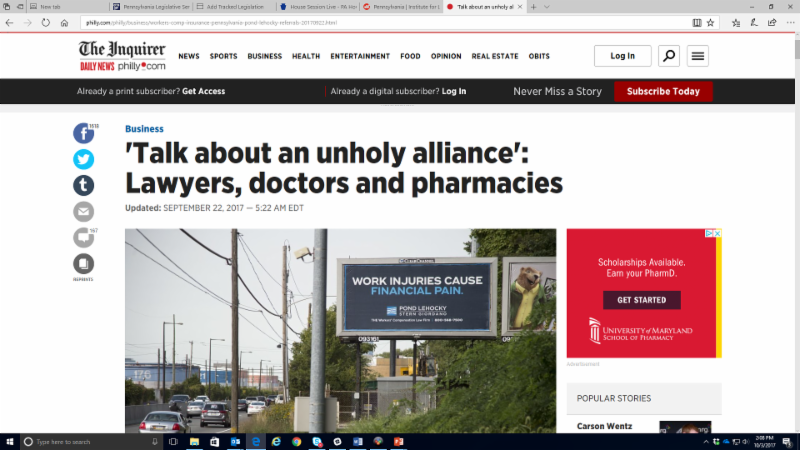